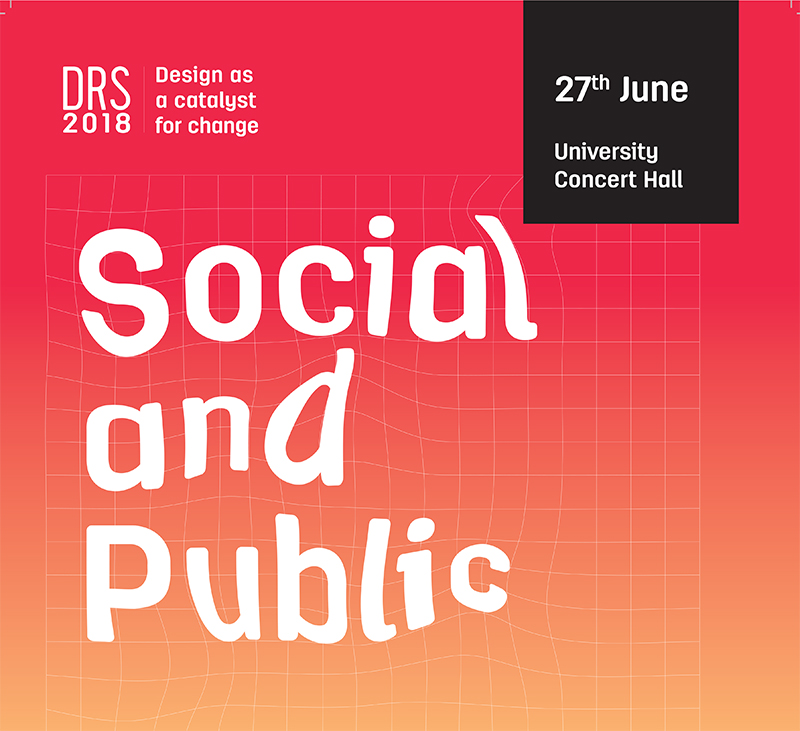 The final DRS2018 Keynote Debate 'Social and Public' will explore the changing contexts of design research and practice through the intersections between design for policy and social design.

The debate will critically examine intersections between existing and emerging trends around design for policy, social design alongside other emerging perspectives such as systemic design, transition design and public service design. By exploring these intersections the debate will open a discussion in the relationships between the research, practice and education domains.

A growing community of design researchers and practitioners have been presenting design as a pragmatic yet speculative approach to policy making, politics and social innovation. Typically design is presented as a counterpoint to the dominant normative, ideological or utopian approaches used by policy makers, political scientists and social activists.

Design in these political and social contexts is often more than simple solutionism in that it considers the practices of policy making, framing of policy or social problems and the evaluation and learning mechanisms of policy makers and citizens. Therefore there is a need for a deeper and wider debate on the distinctiveness of design in relation to other disciplines operating in the policy and social contexts.

This debate will explore the intersections between design for policy and social design. In doing so, the discussion will address the issue from  number of perspective. These include:

The debate will critically examine intersections between existing and emerging trends around design for policy, social design alongside other emerging perspectives such as systemic design, transition design and public service design. By exploring these intersections the debate will open a discussion in the relationships between the research, practice and education domains.

We are delighted to have Dr. Simon O'Rafferty as moderator for this keynote debate. Simon is a design research fellow with the Irish Environmental Protection Agency (EPA). His research explores the intersections of co-design for public service innovation, behaviour change and social innovation for sustainable development. With the EPA his research is working on the co-design of policy interventions for sustainable behaviour change in Ireland across diverse domains such as the Circular Economy, Environment-Health-Wellbeing Nexus and Sustainable Communities. (www.openpractices.net).

He was previously senior researcher at the Ecodesign Centre in the UK and co-director of the social design agency Ark Lab. He is an expert evaluator for the European Commission’s Horizon 2020 Programme and has been an invited speaker on emerging design practice by organisations such as the BBC, British Council and UK Technology Strategy board.

The debaters offering their insights are Andrea Siodmok and Ramia Mazé. Andrea  is Head of the Policy Lab, based in the UK Cabinet Office. Andrea was appointed to set up the Policy Lab on behalf of the Government’s Policy Profession in 2014. She is a Deputy Director at the Cabinet Office with responsibility for Policy Lab, the Open Innovation Team and SKYrooms network of innovation spaces.

An Industrial Designer by training, Andrea began her careering teaching Industrial and Automotive design. After her PhD she moved into the private and public sector where over twenty years she has worked with national and international government departments, charities and social enterprises. She was an early proponent of service design, and has been a champion for public involvement in designing better public services. Her multi-award winning work across different sectors, demonstrates practical ways to improve peoples' lives using design principles and practice.

As a representative of British design Andrea has been invited to run workshops across five continents, regularly speaking and writing about design. In 2011 she was appointed a member of the European Commission’s Design Leadership Board and has been a contributor to a number of books on design including: Design for Policy, Design Transitions, Restarting Britain and Design for Growth and Prosperity. She regularly writes about design and innovation and has been a judge of a number of national and international prizes.

In 2010 Andrea was nominated for the top fifty ‘Women to Watch’ by CCS and the Arts Council and in 2015 she became the 10th female in its history to be awarded the distinguished Royal Society of Art's Bicentenary Medal. In 2016 she received an Honorary Doctorate in Civil Law from Northumbria University for her work as a world leading design thinker.

Ramia is Professor of New Frontiers in Design at Aalto University in Finland, where she is teaching and developing research on the topic of design and governance. Previously in Sweden, she worked for over a decade at universities and at the Interactive Institute, where she completed her PhD in interaction design after an early career practicing as a designer and architect in the US and Europe. In the areas of sustainable development, design activism, smart materials, and interactive spaces, she has published and exhibited widely through interdisciplinary and international research projects. Relevant projects include ‘Feminist Futures of Spatial Practice’ (with Schalk and Kristiansson, Baunach, DE: Spurbuchverlag) and ‘DESIGN ACT Socially- and politically-engaged design today’ (with Ericson, Berlin: Sternberg Press / Iaspis, 2010).